The Desert
A study by Ava gRounds, NIna Palko-Distefano and Tom truong 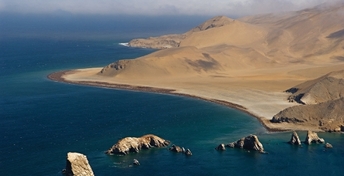 THE
COASTAL DESERT
How would the coastal desert be described?
A desert that is more hospitable than all other desert types in both rainfall and temperature.
What are some landmarks of the coastal desert?
The coastal desert has all of the landmarks from before; oasis, sand dunes, etc. Coastal desert also have beaches because these deserts are near large bodies of water. The beaches are very similar to those of coastal cities such as Ocean City in Maryland.

How hot or cold can the coastal desert become?
Summer temperatures range from 13-24 degrees Celsius. In the winter, the temperature is 5 degrees Celsius and below. The maximum temperatures recorded is around 35 degrees Celsius and negative 4 degrees Celsius.
What is the soil condition in the coastal desert?
Soil is moderately textured and have a moderate salt content.
How much rain does the coastal desert receive?
Annual rainfall is 37 centimeters maximum and 5 centimeters minimum. The rainfall is commonly at 8-13 centimeters average that varies from region to region. Most of the rain precipitate in the ocean before the clouds reaches land, which is why the land is very dry yet it is next to an ocean.
What types of animals live in coastal deserts?
Common animals found in coastal deserts include coyotes, badgers, toads, insects, lizards, snakes, and birds such as great horned owls, golden eagles and bald eagles.
What types of adaptations do these animals evolve?
Like arid and semiarid, most animals are nocturnal and hide out in burrows until nightfall. Some animals, though, have special adaptions to survive the climate with little water and high heat. An example of this is some species of insects lay eggs that do not hatch and remain dormant until the climate becomes suitable to hatch in.
What types of plants live in coastal deserts?
Several plants found in coastal deserts include black bushes, black sage, buckwheat bushes, chrysothamnus, little leaf horsebrush, rice grass and salt bushes.
What types of adaptations do these plants evolve?
Since the soil in coastal deserts is much more porous than the soil of arid and semiarid deserts, many species of plants take advantage of it by adapting large root systems to absorb water from rainfall. Though, still like arid and semiarid, plants adapt to store nutrient and water over long period of time by evolving thick and fleshy stems or leaves.
What does a coastal desert's food web look like?

In the coastal desert the plants are the primary producers. Some plants in a coastal desert are black sage, black bushes, buckwheat, chrysothamnus, little leaf horsebrush, rice grass, and salt bushes. The lizards, snakes, and insects eat the plants. Then great horned owls, and golden and bald eagles eat the small predators.
Next: Cold Desert
Powered by